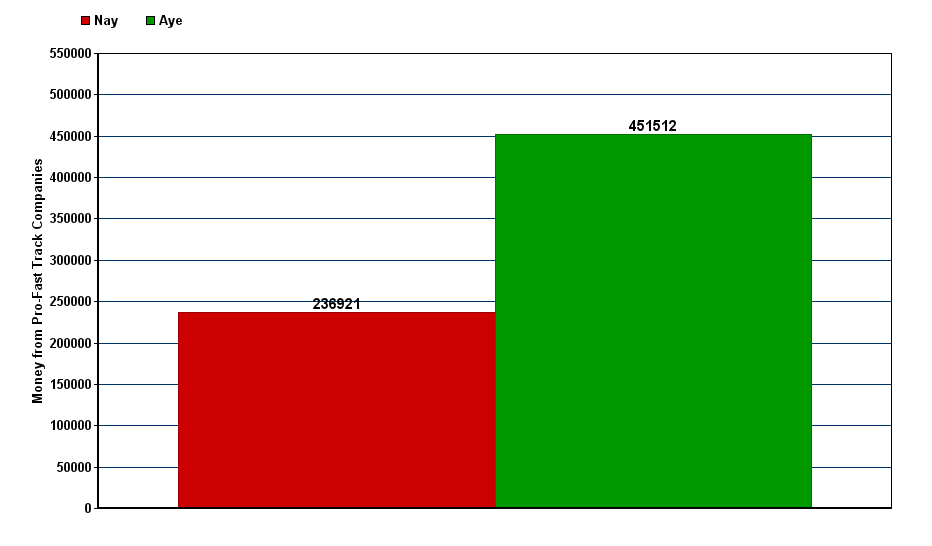 The House of Representatives this afternoon rejected the Senate’s fast track package for the Obama administration’s trade proposals, but they also voted in favor of the fast track portion of the package itself, 219-211. Though largely symbolic, the vote shows that fast track does have the votes to pass in the House, and that will be an important factor in determining how Congress moves forward with giving the administration the fast track authority in the coming weeks.

The special fast track rules would bar members of Congress from submitting amendments to the trade proposals, limit how long they can debate them, and restrict dilatory tactics that typically create a 60-vote hurdle for legislation in the Senate.

So why would any member of Congress vote to willfully cede their power to give input on massively important trade proposals, especially when they don’t know what they will look like when they are presented to them?

But follow the money flowing to Congress from financial companies, pharmaceutical manufacturers, defense companies, and other industries that have been lobbying for fast track power, and the correlation between campaign contributions and votes on the measure is clear.

Most of the ‘yes’ votes were provided by Republicans, and the majority of the ‘no’ votes were from Democrats. In both cases, the members who broke with their caucuses did so in concert with their comparative level of contributions they received from pro-fast track companies.

If approved, fast track would greatly increase the chances that Obama’s trade deals, including the Trans-Pacific Partnership (TPP), the Trans-Atlantic Trade and Investment Partnership (TTIP), and the Trade in Services Agreement (TISA), that are currently being negotiated. The texts of these agreements have never been released to the public, but from what we’ve learned through leaked documents, they contain several provisions that will benefit large multinational corporations.

For example, the TPP would allow multinational companies to sue countries that pass laws and regulations that could cause them to lower their profit outlooks. The lawsuits would be decided by an international tribunal of private lawyers who would be empowered to order payments to the corporation from governments. The TISA would create an international loophole for net neutrality rules and allow companies to store personal user data in countries that have weak or non-existent privacy protections.