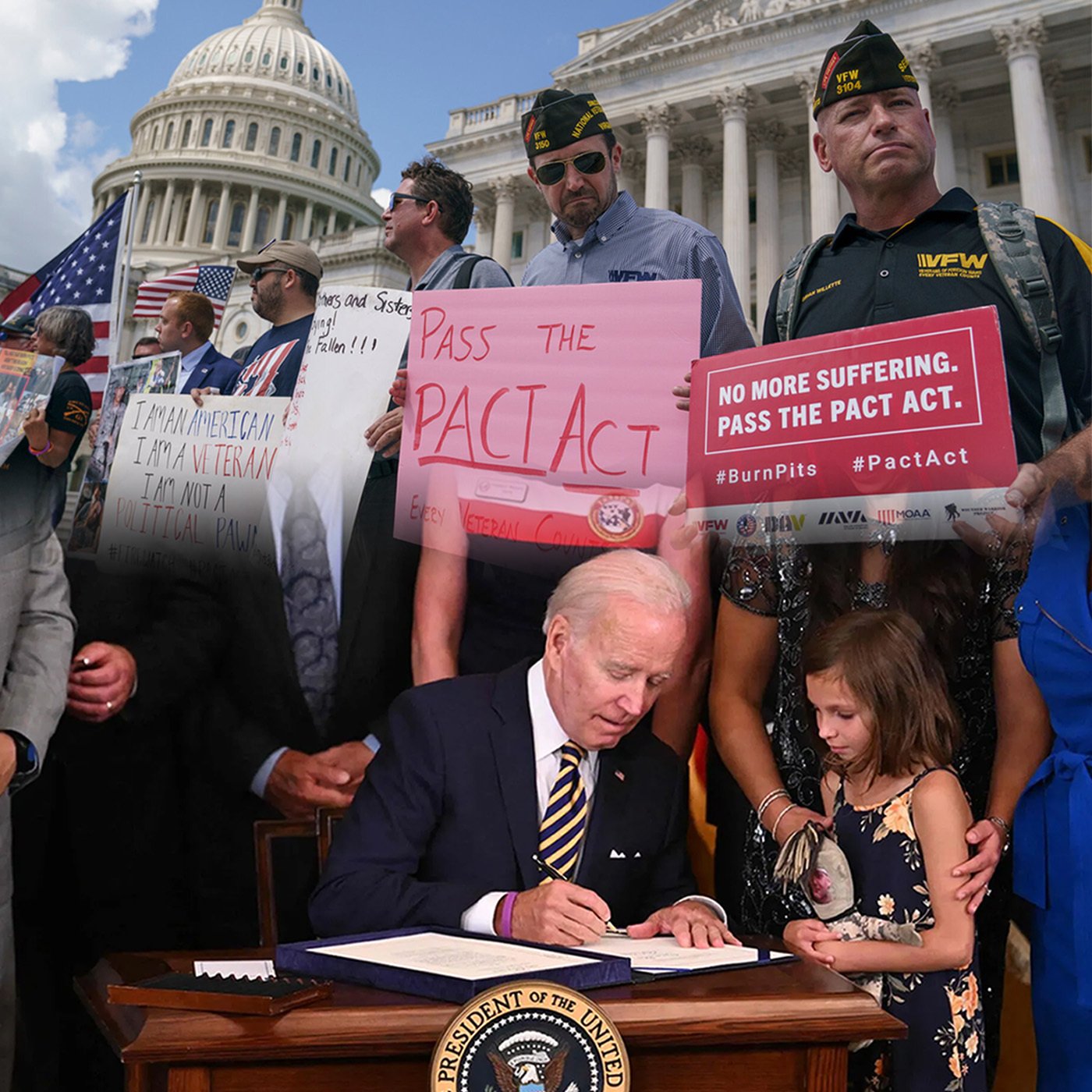 After decades of our government denying healthcare to veterans they exposed to poisonous toxins, the PACT Act – which will eventually provide this hard-fought-for care – is now law. In this episode, learn exactly who qualifies for these new benefits and when, discover the shocking but little-known events that led to their poisonings, and find out what exactly happened during those 6 days when Senate Republicans delayed the passage of the PACT Act.

CD124: The Costs of For-Profit War

What the PACT Does and Doesn’t Do

“The PACT Act and your VA benefits.” U.S. Department of Veterans Affairs.

Robert Mitchell. Jan 21, 2018. “Cataclysmic cargo: The hunt for four missing nuclear bombs after a B-52 crash.” The Washington Post.

“Summary of the water contamination situation at Camp Lejeune.” Agency for Toxic Substances and Disease Registry.

U.S. Foreign Wars No One Talks About

Joseph R. Biden. June 08, 2022. “Letter to the Speaker of the House and President pro tempore of the Senate regarding the War Powers Report.” The White House.

Muhammad Fraser-Rahim. Oct 16, 2017. “The Deaths of Four Elite U.S. Soldiers in Niger Show Why Trump Must Wake Up on Terrorism in Africa.” Newsweek.

Timeline of Votes and Changes

Senator Toomey on State of the Union with Jake Tapper

7:00 Sen. Pat Toomey (R-PA): Here’s what you need to keep in mind, Jake. First of all, this is the oldest trick in Washington. People take a sympathetic group of Americans — it could be children with an illness, it could be victims of crime, it could be veterans who have been exposed to toxic chemicals — craft a bill to address their problems, and then sneak in something completely unrelated that they know could never pass on its own and dare Republicans to do anything about it because they know they’ll unleash their allies in the media and maybe a pseudo-celebrity to make up false accusations to try to get us to just swallow what shouldn’t be there. That’s what’s happening here, Jake.

10:40 Jake Tapper: So one of the questions that I think people have about what you’re claiming is a budgetary gimmick is, the VA budgets will always remain subject to congressional oversight, they can’t just spend this money any way they want. And from how I read this legislation, it says that this money has to be spent on health care for veterans who suffered exposure from toxic burned pits. Sen. Pat Toomey (R-PA): This is why they do this sort of thing, Jake, because it gets very deep in the weeds and very confusing for people very quickly. It’s not really about veteran spending. It’s about what category of government bookkeeping, they put the veterans spending in. My change, the honest people acknowledge it will have no effect on the amount of money or the circumstances under which the money for veterans is being spent. But what I want to do is treat it, for government accounting purposes, the way we’ve always treated it for government accounting purposes. Because if we change it to the way that the Democrats want, it creates room in future budgets for $400 billion of totally unrelated, extraneous spending on other matters.

Senator Toomey on Face the Nation with John Dickerson

6:25 Sen. Pat Toomey (R-PA): Honest Democrats evaluating this will tell you: if my amendment passes, not a dime change in spending on veterans programs. What changes is how the government accounts for it. John Dickerson: I understand, but the accounting change, as you know, is a result — the reason they put it in that other bucket is that it doesn’t subject it to the normal triage of budgeting. And the argument is that the values at stake here are more important than leaving it to the normal cut and thrust of budgeting.

00:20 Sen. Ted Cruz (R-TX): What the dispute is about is the Democrats played a budgetary trick, which is they took $400 billion in discretionary spending and they shifted it to a mandatory one. Jon Stewart: What Ted Cruz is describing is inaccurate, not true, bulls ** t. This is no trick. Everything in the government is either mandatory or discretionary spending depending on which bucket they feel like putting it in. The whole place is basically a f * ing shell game. And he’s pretending that this is some new thing that the Democrats pulled out, stuck into the bill, and snuck it past one Ted Cruz. Now I’m not a big-city Harvard educated lawyer, but I can read. It’s always been mandatory spending so that the government can’t just cut off their funding at any point. No trick, no gimmick, [it’s] been there the whole f**king time.

1:50 Sen. Ted Cruz (R-TX): What’s the Republicans made clear is, if we leave that spending as discretionary — don’t play the budgetary trick — the bill will pass with 80 or 90 votes. Jon Stewart: I don’t know how many other ways to say this, but there was no budgetary trick and it was always mandatory. And when they voted in the Senate on June 16, they actually got 84 votes. And you know who voted for that? Ted f*cking Cruz and every other one of those Republicans that switched their votes. There was no reason for them to switch the votes. The bill that passed the Senate 84 to 14 on June 16 has not had one word added to it by Democrats, or spending fairies, or anybody else. It’s the same f*cking bill.

‘I Call Bullshit!’ Jon on the PACT Act Being Blocked in the Senate

3:20 Jon Stewart: June 16, they passed the PACT Act 84 to 14. You don’t even see those scores in the Senate anymore. They passed it. Every one of these individuals that has been fighting for years, standing on the shoulders of Vietnam veterans who have been fighting for years, standing on the shoulders of Persian Gulf War veterans fighting for years, Desert Storm veterans, to just get the health care and benefits that they earn from their service. And I don’t care if they were fighting for our freedom. I don’t care if they were fighting for the flag. I don’t care if they were fighting because they wanted to get out of a drug treatment center, or it was jail or the army. I don’t give a shit. They lived up to their oath. And yesterday, they spit on it in abject cruelty. These people thought they could finally breathe. You think their struggles end because the PACT Act passes? All it means is they don’t have to decide between their cancer drugs and their house. Their struggle continues. From the crowd: This bill does a lot more than just give us health care. Jon Stewart: It gives them health care, gives them benefits, lets them live. From the crowd: Keeps veterans from going homeless keeps veterans from become an addict, keeps veterans from committing suicide. Jon Stewart: Senator Toomey is not going to hear that because he won’t sit down with this man. Because he is a fucking coward. You hear me? A coward.

5:15 Jon Stewart: Pat Toomey stood up there — Patriot Pat Toomey, excuse me, I’m sorry. I want to give him his propers, I want to make sure that I give him his propers. Patriot Pat Toomey stood on the floor and said “this is a slush fund, they’re gonna use $400 billion to spend on whatever they want.” That’s nonsense. I call bullshit. This isn’t a slush fund. You know, what’s a slush fund? The OSO, the Overseas Contingency Operations Fund. $60 billion, $70 billion every year on top of $500 billion, $600 billion, $700 billion of a defense budget. That’s a slush fund, unaccountable. No guardrails? Did Pat Toomey stand up and say, this is irresponsible. The guard rails? No, not one of them. Did they vote for it year after year after year? You don’t support the troops. You support the war machine.

8:20 Jon Stewart: I honestly don’t even know what to say anymore. But we need your help, because we’re not leaving. These people cannot go away. I don’t know if you know this, you know, obviously, I’m not a military expert. I didn’t serve in the military, but from what I understand, you’re not allowed to just leave your post when the mission isn’t completed. Apparently you take an oath, you swear an oath, and you can’t leave, that these folks can leave because they’re on Senate time. Go ahead, go home, spend time with your families, because these people can’t do it anymore. So they can’t leave until this gets done.

3:46:58 Rep. Mark Takano (D-CA): The way this country has dealt with toxic exposure has been piecemeal and inadequate. President Biden recognizes this, too. Shortly after he was sworn in, I met with the President about our shared priorities for veterans. Upon learning of my goal to pass comprehensive legislation to help toxic-exposed veterans, the President leaned over to me and talked about his son, Beau, who served near burn pits in Iraq and Kosovo. It might be hard for most Americans to imagine what a burn pit looks like because they are illegal in the United States. Picture walking next to and breathing fumes from a burning pit the size of a football field. This pit contained everything from household trash, plastics, and human waste to jet fuel and discarded equipment burning day and night. Beau Biden lived near these burn pits and breathed the fumes that emanated from them. President Biden believes that con- stant exposure to these burn pits, and the toxic fumes they emitted, led to Beau’s cancer and early death. It was during that meeting when I knew I had a partner in President Biden.