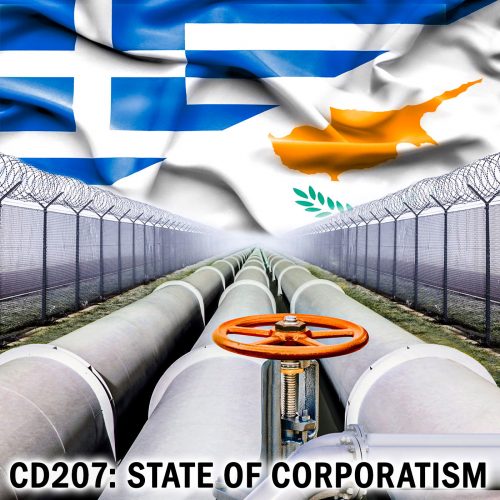 It’s 2020 and the government was actually funded before the new year! However, as always, dozens of bills hitched a ride into law attached to the government funding. In this episode, learn about some of the dingleberry laws that could effect your retirement savings, cable bills, and our partners in war.

Kyriakos Mitsotakis: Companies such as Cisco and Pfizer are already looking to set up research centers in Greece.

Kyriakos Mitsotakis: There’s always this advice that other heads of state and government gave me when I was in the position. They told me, make sure you do the reforms very quickly. And then when you look at how other governments have performed, usually that is not the case. We are going against the trends. And we’ve also said that for 2020, we will continue with this aggressive reform agenda.

Kyriakos Mitsotakis: We’re really looking to strengthen our ability to import LNG. We’ve expanded the LNG capacity of our main LNG terminal in Revithoussa outside Athens. But we’re also looking to complete a floating storage and regasification unit and FSR EU outside the port of Alexandroupoli. I consider this port, this project absolutely critical for Greece. I’ve given it my full personal support. It will be an additional, source, entry point for LNG, also American LNG into the European market. And of course, as you pointed out, we have also signed the East Med pipeline, which is an ambitious longterm projects that will bring gas from the Eastern Mediterranean into the European markets. This is an important project for Europe, not just for Greece. Eastern Mediterranean is the only proven source of natural gas, new proven source of natural gas, that Europe has access to. For the next 30 years, at least, natural gas is going to be the transition fuel that will allow us to move towards a carbon neutral Europe. This is also important for Greece and our energy transition. And I think the countries of the region have taken the important geopolitical decision that the best way to get this gas out of the region is for a pipeline that will go through Cyprus, Greece and end up in Italy. So this is an important statement of intent. And we’re very, very happy that we signed the project in Athens a few days ago.

Kyriakos Mitsotakis: You’re all aware of the fact that we are trying to unblock the old airport project, the Hellinikon project. And we’ve really worked very, very hard with our ministers to make sure that we remove all the unnecessary bureaucratic impediments in order for this investment to take place. We have two American companies bidding for the casino license. It’s important that for the first time, some serious money is going to be invested in this project by American companies.

Kyriakos Mitsotakis: Started lowering our taxes, lower taxes on real estate, lowered taxes on corporation starting January 1st of this year. And I think there’s a general sense in Greece that we are open for business. We’re looking to aggressively attract foreign direct investment. And it’s already beginning to happen.

Kyriakos Mitsotakis: We will start the discussions to explore the possibility of Greece joining the F35 program. This is an important priority for me and the government. Once the F16 program is completed in 2024, we feel we will have the fiscal space.

Kyriakos Mitsotakis: It is unacceptable within the context of an alliance to have one ally and member clearly provoke another ally, clearly referring to Turkey and the activities by President Erdogan. And that this is something which within the context of an alliance should not be brushed aside because the general approach of NATO has always been, Oh, okay, we have two ally members. They have their issues, let them sort it out, but I think we have a clear case to make that now the situation is rather different.