CD200: How to End Legal Bribes 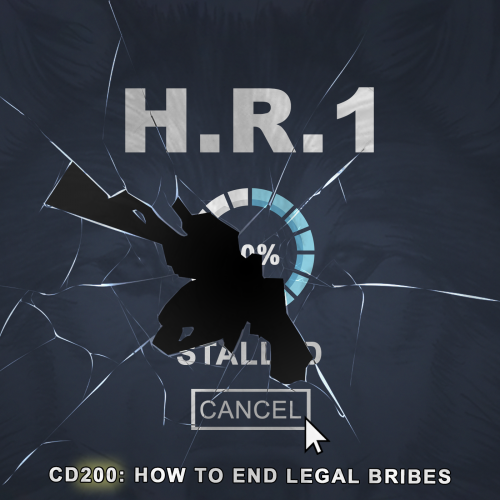 CD200: How to End Legal Bribes


The currently legal ability of obscenely rich people to bribe lawmakers and law enforcers is the source of many – if not all – of our political problems. In this episode, get an update on the few democracy-enhancing bills that have moved in this Congress and Jen speaks to Sam Fieldman – the National Counsel at Wolf-PAC – who explains how we can constitutionally end the role of money in politics by going around Congress.
Joe Briney joins Jen for the thank you’s.

Sec. 107: These rules will apply “for any election for Federal office held in 2020 or any succeeding year.”

Sec. 203: Requiring use of software and hardware for which information is disclosed by manufacturer

Sec. 204: Poll books will be counted as part of voting systems for these regulations

HR 391: White House Ethics Transparency Act of 2019
Pdf of the bill
Reported June 12, 2019 out of the House Committee on Oversight and Reform 23-16
On January 28, 2017 – a week after taking office – President Trump issued an executive order that requires all executive agency appointees to sign and be contractually obligated to a pledge that…

BUT Section 3 allows waivers: “The President or his designee may grant to any person a waiver of any restrictions contained in the pledge signed by such person.”
Sec. 2: Requires any executive branch official who gets a waiver to submit a written copy to the Director of the Office of Government Ethics and make a written copy of the waiver available to the public on the website of the agency where the appointee works.

H.R. 745: Executive Branch Comprehensive Ethics Enforcement Act of 2019
Reported March 26, 2019 out of the Committee on Oversight and Reform 18-12
Pdf of the bill
Sec. 2: Creates a transition ethics program

S. 195 : Creates a transition ethics program: Access to Congressionally Mandated Reports Act
Pdf of the bill
Reported 4/10/19 out of the Committee on Homeland Security and Governmental Affairs. On Senate Calendar
Sec. 2: Definitions

Hearing: Committee on Oversight and Reform:Strengthening Ethics Rules for the Executive Branch, February 6, 2019