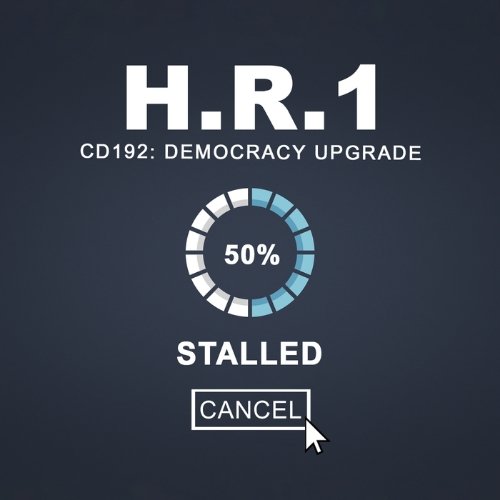 Things often don’t go according to plan. In this episode, featuring a feverish and frustrated Jen Briney, learn about the shamefully rushed process employed by the Democrats to pass their top priority bill, H.R. 1, through the House of Representatives.

Official title: “To expand American’s access to the ballot box, reduce the influence of big money in politics, and strengthen ethics rules for public servants, and for other purposes.”

Sec. 1001: Every State Has to Allow Us To Register to Vote Online

Sec. 1002: Every State Has To Allow Us To Update Our Registration Online

Sec. 1016: Corrections to Voter Information Can Be Done on Election Day

Sec. 1017: The Federal Government Will Pay to Make The Changes

Sec. 1031: Voters Can Register At the Polling Place On Election Day

Part 4: Conditions on Removal on Basis of Interstate Cross-Checks

Sec. 1041: Requirements To Use Cross Check To Remove Voters

Sec. 1071: Fines and Prison For Interference in Voter Registration

Subtitle B: Access to Voting for Individuals With Disabilities

Sec. 1201: Prohibits Removal of Names Based Solely on Caging Lists

Sec. 1408: Effective for any election held after enactment

Subtitle I: Voting by Mail

Sec. 1821: Head of Elections Can’t Campaign for Elections They Oversee

Sec. 2431: Authorizes payments to States of $150,000 per district to help pay for the redistricting process

Subtitle B: DISCLOSE Act – “Democracy Is Strengthened by Casting Light on Spending in Elections Act”

Sec. 4208: Public Record of Online Political Ads * Requires online platforms to create and make available online for public inspection a complete record of requests to purchase political advertisements if they purchase more than $500 worth in one calendar year

Subtitle D : Stand by Every Ad – “Stand By Every Ad Act”

Sec. 4601: Contractors Can Be Forced to Disclose Donations

Subtitle B: Congressional Elections – “Government By the People Act of 2019”

Sec. 8004: Waiting Period For Procurement Officers To Work for Contractors

Subtitle B: Presidential Conflicts of Interest

Subtitle A: Requiring members of Congress to Reimburse Treasury for Amounts Paid as Settlements and Awards Under Congressional Accountability Act of 1995

Subtitle B: Conflicts of Interest

Sec. 9101: Members Can’t Be on For-Profit Boards of Directors

Sec. 9103: Prohibition Above Can Be Changed via House Rules

Hearing: For the People: Our American Democracy, Committee on House Administration, February 14, 2019.

Hearing: Full Committee Hearing on the “Strengthening Ethics Rules for the Executive Branch”, Committee on Oversight and Reform, February 6, 2019.

Hearing: Full Committee Hearing on the “For the People Act of 2019”, House Committee on the Judiciary, January 29, 2019.