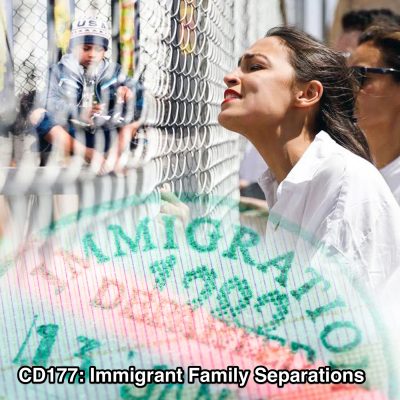 A new policy change by the Trump administration on May 7th has resulted in thousands of children being separated from their want-to-be-immigrant parents who crossed the U.S. southern border in the wrong location. In this episode, hear from officials in every branch of government involved to learn why this is happening, why it’s proving to be so difficult to return the children to their parents, and what we can do to help this situation.

Jen’s letter that she sent to her members of Congress. You are welcome to use this as you wish!

Attorney General Jeff Sessions Today we are here to send a message to the world: we are not going to let this country be overwhelmed. People are not going to caravan or otherwise stampede our border. We need legality and integrity in the system. That’s why the Department of Homeland Security is now referring 100 percent of illegal Southwest Border crossings to the Department of Justice for prosecution. And the Department of Justice will take up those cases. I have put in place a “zero tolerance” policy for illegal entry on our Southwest border. If you cross this border unlawfully, then we will prosecute you. It’s that simple.

Attorney General Jeff Sessions – In order to carry out these important new enforcement policies, I have sent 35 prosecutors to the Southwest and moved 18 immigration judges to the border. These are supervisory judges that don’t have existing caseloads and will be able to function full time on moving these cases. That will be about a 50 percent increase in the number of immigration judges who will be handling the asylum claims.”