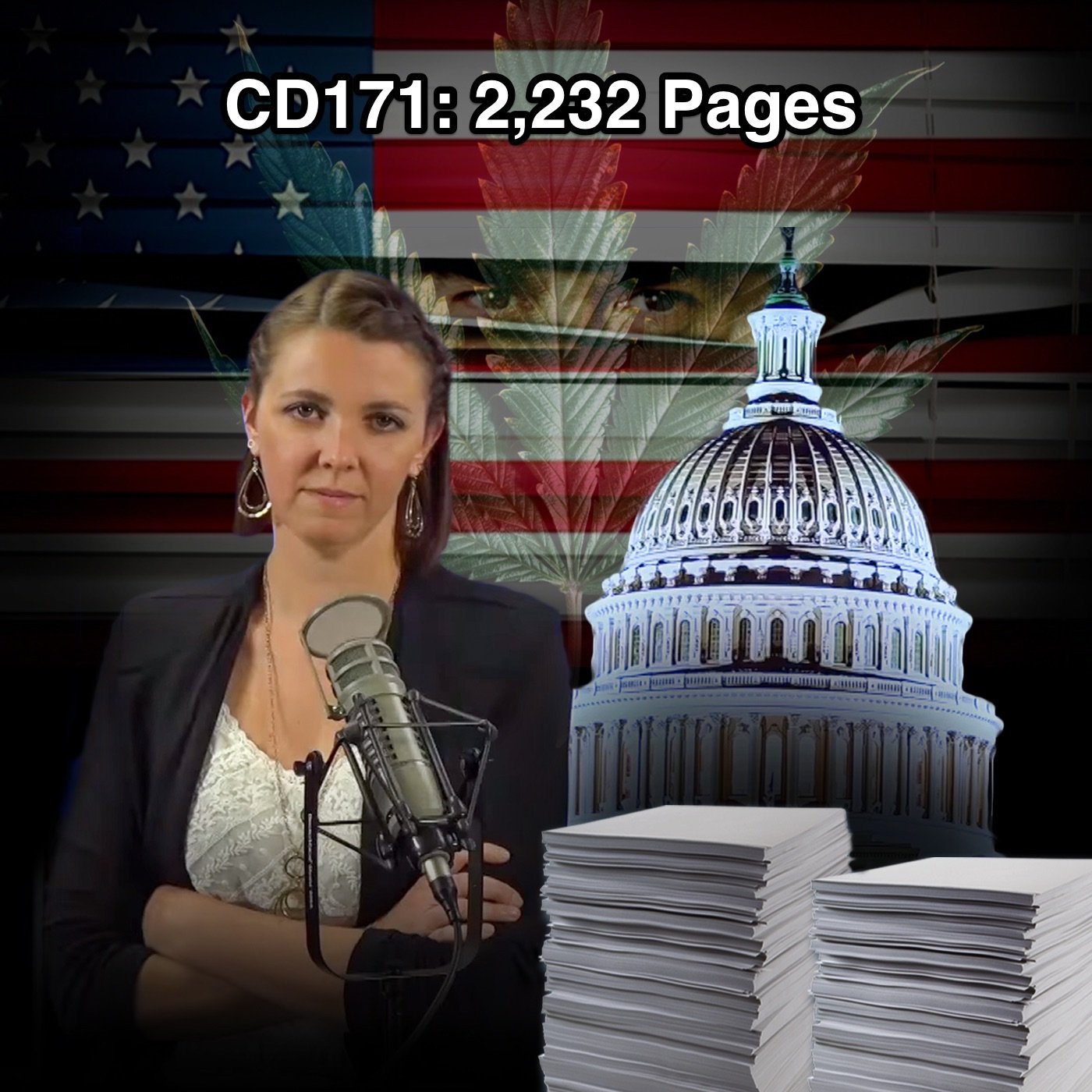 In a special crossover episode of The David Pakman Show on YouTube, hear the infuriating story of how the 2,232 page “omnibus” government funding bill became law , discover a provision snuck into law that further erodes privacy rights, learn why only some stoners and legit medical marijuana patients are protected by the omnibus, and hear about some strange provisions that appear to give free reign to the intelligence agencies for the next six months.

Sec. 537: “None of the funds made available under this Act to the Department of Justice may be used, with respect to any of the States of Alabama, Alaska, Arizona, Arkansas, California, Colorado, Connecticut, Delaware, Florida, Georgia, Hawaii, Illinois, Indiana, Iowa, Kentucky, Louisiana, Maine, Maryland, Massachusetts, Michigan, Minnesota, Mississippi, Missouri, Montana, Nevada, New Hampshire, New Jersey, New Mexico, New York, North Carolina, North Dakota, Ohio, Oklahoma, Oregon, Pennsylvania, Rhode Island, South Carolina, Tennessee, Texas, Utah, Vermont, Virginia, Washington, West Virginia, Wisconsin, and Wyoming, or with respect to the District of Columbia, Guam, or Puerto Rico, to prevent any of them from implementing their own laws that authorize the use, distribution, possession, or cultivation of medical marijuana.”

Sec. 8071: Over $705 million will be spent on missile defense for Israel, with requirements that $420 million of that be shared with U.S. war equipment manufacturers, including at least $120 million to be shared with Boeing for the Arrow 3 Upper Tier system.

Sec. 8073: Money appropriated by this Act for intelligence activities are “deemed to be specifically authorized by the Congress” during fiscal year 2018 until the enactment of the Intelligence Authorization Act for Fiscal Year 2018.

Sec. 8107: Allows local military commanders – if the Defense Secretary creates regulations allowing it – to provide payments to people for damage, injuries, and deaths caused by the Armed Forces.

Sec. 8115:: Prohibits the Defense Department from initiating or expanding support to foreign forces, irregular forces, groups, or individuals without informing Congress 15 days in advance, but the Defense Secretary can waive this and tell Congress within 72 hours.

Sec. 8119: Military and civilian employees of the Defense Department can’t use their Government Travel Charge Card on gambling or strippers.

AFGHANISTAN SECURITY FORCES FUND – $4.666 billion will be provided to the “security forces of Afghanistan, including the provision of equipment, supplies, services, training, facility and infrastructure repair, renovation, construction, and funding.”

COUNTER-ISIS TRAIN AND EQUIP FUND – $1.769 billion will be provided for “assistance, including training; equipment; logistics support, supplies, and services; stipends; infrastructure repair and renovation; and sustainment, to foreign security forces, irregular forces, groups, or individuals participating, or preparing to participate in activities to counter the Islamic State of Iraq and Syria, and their affiliated or associated groups” – The money can also be used to “enhance the border security of nations adjacent to conflict areas including Jordan, Lebanon, Egypt, and Tunisia.”

Sec. 9007: Prohibits the US Government from creating any permanent military bases in Iraq or Afghanistan or from exercising “United States control over any oil resource of Iraq.”

Sec. 9011: Allows $500 million to be given to Jordan “to support the armed forces of Jordan and to enhance security along its borders.”

Sec. 9013: Provides $200 million for the Ukraine Security Assistance Initiative to “provide assistance , including training; equipment; lethal weapons of a defensive nature; logistics support, supplies and services; sustainment; and intelligence support to the military and national security forces of Ukraine, and for replacement of any weapons or defensive articles provided to the Government of Ukraine from the inventory of the United States”

Sec. 9022: Allows the money in the Afghanistan Security Forces fund to be used to provide training, equipment, and “other assistance” that is legally prohibited because the “Secretary of Defense has credible information that he unit has committed a gross violation of human rights.” . This is allowed as long as the Defense Secretary notifies Congress within 30 days.

Sec. 108: Prohibits permits from being required for the release of dredged or mill material from farming, ranching, construction and maintenance of dikes, dams, levees, and “transportation structures”, construction or maintenance of farm or stock ponds or irrigation ditches, construction of farm roads or forest roads, or for temporary roads for moving mining equipment.

Sec. 302: Money appropriated for intelligence “by this or any other Act” are “deemed to be specifically authorized by the Congress” for [“intelligence or intelligence-related activity](http://uscode.house.gov/view.xhtml?req=(title:50%20section:3094%20edition:prelim) for the rest of fiscal year 2018 (until September 30, 2018) or until the enactment of the Intelligence Authorization Act for fiscal year 2018.

Sec. 306: Prohibits the Secretary of Energy from creating any new regional petroleum reserve unless the “reserve is explicitly requested in advance in an annual budget submission and approved by the Congress in an appropriations Act.”

Sec. 309: Allows money to be used for the construction of the 99-D-143 Mixed Oxide Fuel Fabrication Facility in South Carolina.

Sec. 311: Allows the Secretary of Energy to sell oil from the Strategic Petroleum Reserve if the President determines that a regional supply shortage exists and there will be severe increase in the price of oil.

Sec. 506: Money appropriated by this Act for intelligence activities are “deemed to be specifically authorized by the Congress” during fiscal year 2018 until the enactment of the Intelligence Authorization Act for Fiscal Year 2018.

DIVISION G – Department of the Interior, Environment, and Related Agencies

Sec. 113: Allows the Secretary of the Interior to remove wild horses and burros from public land and transfer them to other governmental agencies to be used a work animals.

Sec. 120: Prohibits the Secretary of the Interior from protecting the sage grouse using the Endangered Species Act

Sec. 121: Enacts several provisions and full bills into law, including a bill that renames the White Clouds Wilderness in Idaho after Cecil D. Andrus.

Sec. 416: Prohibits money from this or “any other Act” from being used to implement any regulation requiring permits for livestock producers to emit carbon dioxide, nitrous oxide, water vapor, or methane.

Sec. 418: Prohibits money from being used to regulate the lead content of ammunition or fishing tackle.

Sec. 432: Prohibits permits from being required for the release of dredged or mill material from farming, ranching, construction and maintenance of dikes, dams, levees, and “transportation structures”, construction or maintenance of farm or stock ponds or irrigation ditches, construction of farm roads or forest roads, or for temporary roads for moving mining equipment (this provision was also in Division D)

Department of the Interior, Environment, and Related Agencies Explanatory Statement

Sec. 3: Adds human trafficking to the definition of “transnational organized crime” in order to allow the State Department to pay snitches. – Current law allows the State Department to appropriate “such amounts as many be necessary” – Payments are capped at $25 million except as personally authorized by the Secretary of State. The cap is $50 million for information leading to the capture of a leader of a foreign terrorist organization. – Payments under $100,000 do not need approval from the Secretary of State. – The decisions made by the Secretary of States are final and can not be reviewed by the courts. – The original law from 1984 allowed payments capped at $500,000. Payments over $100,000 had to be approved by the President.

Sec. 502: Provides grants to States, local governments, and Indian tribes to train school personnel and students to prevent school violence, develop and operate systems for anonymous reporting of threats (including apps, hotlines, and websites), placement of metal detectors, locks and lighting, and new technologies and “any other measure” that “may provide significant improvement in security”. Authorizes $75 million in funding for 2018 and $100 million per year from 2019-2028.

Sec. 105: In order for information sharing to occur between the US Government and a foreign government, the countries must enter into an “Executive Agreement” – The Executive Agreement will be valid if the Attorney General submits a written certification to Congress that the country has, among other qualifications, “robust substantial and procedural protections for privacy and civil liberties” and is a party to the Convention on Cybercrime. – Determinations made by the Attorney General are not subject to judicial review. – The Executive Arrangement can not take effect until after 180 days after Congress is notified. – Congress can enact a joint resolution of disapproval to stop it. – An order issued by a foreign government has to identify a specific person, account, address, or personal device and the order must be for a fixed, limited duration. Orders by foreign governments are subject to review by our courts.