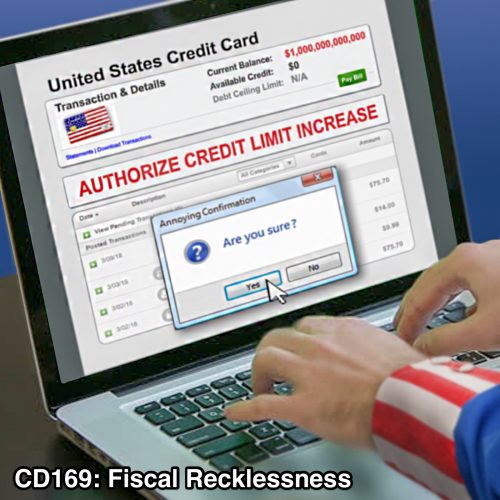 Another shutdown, another dingleberry-filled temporary funding law! In this episode, learn about the new law that reopened the government after the 6 hour shutdown by providing funding until March 23 and be one of the few people in the country who will know about the random goodies that hitchhiked their way into law. Miranda Hannah joins Jen for the thank yous.

Sec. 10102: Allows the flag to be flown at half staff when a first responder dies at work.

Title I: Gives $2.36 billion to the Department of Agriculture, available until the end of 2019, to pay for “expenses related to crops, trees, bushes, and vine losses” caused by Hurricanes Harvey, Irma, Maria, and other hurricanes and wildfires that took place in 2017.

Sec. 20201: Orders the Secretary of Commerce to issue a waiver within 120 days of the provisions of the Marine Mammal Protection Act which prohibit the capture of marine mammals for three infrastructure projects designed to reduce land loss in Louisiana. It says the waiver for the projects “will remain in effect for the duration of the construction, operations and maintenance of the projects. No rule-making, permit, determination, or other condition or limitation shall be required when issuing a waiver pursuant to this section.”

Title V: Provides $1.652 billion for the “Disaster Loans Program Account” but $618 million of that can be spend on “administrative expenses to carry out the disaster loan program”

Sec. 20604: Adds religious institutions to the definition of a “Private Nonprofit Facility”, which makes them eligible to receive tax money for disaster aid services.

Title XI: Provides $1.374 billion for the Federal highway “Emergency Relief Program”, with the Federal government paying 100% of the costs for Puerto Rico

Sec. 20102: Allows victims of wildfires in CA to borrow up to $100,000 from their own retirement accounts and pay it back within 3 years.

Sec. 20104: Suspends limitations on charitable contributions made before December 31, 2018 for relief efforts in the California wildfire disaster area

Sec. 20301: Provides an extra $3.6 billion for Puerto Rico and $106 million for the US Virgin Islands for Medicaid

Division C: Budgetary and other matters

Sec. 30102: Zeroes out the balances on the PAYGO budget scorecard.

Subtitle A, Subtitle B, and Subtitle C: Extend 31 tax credits

Sec. 40411: Extends until 2022 and then phases out a 30% credit for fiber-optic solar, fuel cell, and small wind energy property, eliminating the credits entirely by 2024.

Sec. 41119: Extends an existing tax credit for carbon sequestration technology for 6 years and changes it so that more money is rewarded for each ton of carbon captured and eliminates a cap on how many tons were eligible for credits (it was 75 million tons).

Title I: Extends the authorization for the Children’s Health Insurance Program through 2027 and adds $48 million per year for 2023-2027 for enrollment assistance.

Sec. 50321: Expands a test program, which began in 2015 with 7 States, to all States. The program allows privately administered Medicare Advantage plans flexibility to design custom insurance plans for people with certain chronic diseases.

Sec. 50322: Starting in 2020, privately administered Medicare Advantage plans will be able to offer extra benefits for people with chronic health conditions and uniformity requirements will be waived for those plans.

Sec. 50341: Starting sometime in 2019, some Medicare administrators will be allowed to offer incentives up to $20 to encourage seniors to encourage them to come to appointments with their primary care doctors. The money collected will not be considered taxable income. The Secretary of Health and Human Services can cancel this program at any time for any reason.

Sec. 50711: Creates a program funding State efforts to provide mental health care, substance abuse treatment, and parenting counseling to parents in order to prevent their children from being placed in foster care.

Sec. 50712: Allows foster care payments to be given to licensed residential treatment facilities if the facility welcomes the child to live with its parent as long as the facility provides parenting classes and family counseling.

Sec. 50745: Requires States to require every child-care institution to run fingerprint-based checks of national crime information databases on any adult working in their facility.

Sec. 53105: Rescinds $985 million from the Medicaid Improvement Fund, which is meant to improve oversight of Medicaid contracts and contractors.

Sec. 53107: Reduces pay for outpatient physical and occupational therapists for care their assistant’s provide to 85 percent of the rate that would have otherwise been paid.

Sec. 53115: Empty’s the Medicare Improvement Fund by eliminating all $220 million.

Sec. 53116: Accelerates the closing of the prescription drug “donut hole” for seniors by moving up a decrease in out of pocket prescription costs to 25% by one year – it’s now 2019 – and by increasing the percentage that drug manufacturers must discount their drugs from 50% to 70%.

20 Years of Congress Budget Procrastination in One Chart 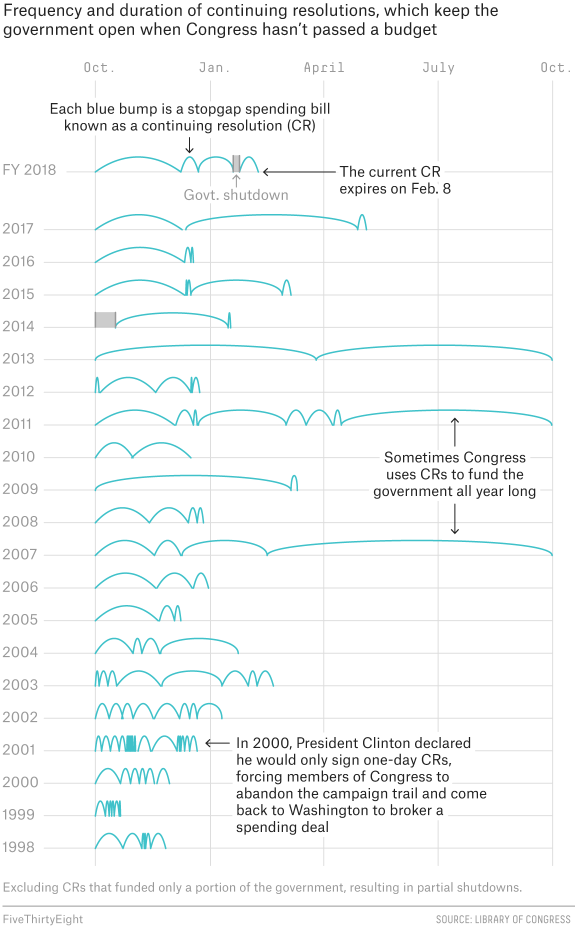 Senator Rand Paul: The bill is nearly 700 pages. It was given to us at midnight last night, and I would venture to say no one has read the bill. No one can thoroughly digest a 700-page bill overnight, and I do think that it does things that we really, really ought to talk about and how we should pay for them.

Senator Rand Paul: You realize that this is the secret of Washington. The dirty little secret is the Republicans are loudly clamoring for more military spending, but they can’t get it unless they give the Democrats welfare spending, so they raise all the spending. It’s a compromise in the wrong direction. We should be compromising in the direction of going toward spending only what comes in. And yet this goes on and on and on.

Senator Rand Paul: For the umpteenth time, Congress is going to exceed their budget caps. We had something passed back in 2010. It was called PAYGO. It was supposed to say, if you’re going to pay new money, you had to go find an offset somewhere else. You could only pay as you go. It was sort of like a family would think about it. If you’re going to spend some more money, you either got to raise your income or you’ve got to save some money. You know how many times we’ve evaded it since 2010? Thirty-some-odd times.

Senator Rand Paul: So the bill’s going to exceed the budget caps by $296 billion. And that’s not counting the money they don’t count, all right? So these people are really, really clever. Imagine them running their fingers together and saying, how can we hide stuff from the American people? How can we evade the spending caps so we can be even more irresponsible than we appear? So, 296 is the official number; about $300 billion over two years that will be in excess of the budget caps. But there’s another $160 billion that’s stuck into something called an overseas contingency fund. The budget caps don’t apply there. So we’re $300 billion for two years over the budget caps; then we’re another 160 billion over the caps—they just don’t count it. They act as if it doesn’t matter; we’re just not going to count it.

Senator Rand Paul: The spending bill’s 700 pages, and there will be no amendments. The debate, although it’s somewhat inside baseball that we’re having here, is over me having a 15-minute debate, and they say, woe is me; if you get one, everybody’ll want an amendment. Well, guess what? That would be called debate. That would be called an open process. That would be called concern for your country—enough to take a few minutes. And they’re like, but it’s Thursday, and we like to be on vacation on Fridays. And so they clamor. But we’ve been sitting around all day. It’s not like we’ve had 100 amendments today, we’re all worn out, we can’t do one more. We’re going to have zero amendments—zero, goose egg, no amendments.

Senator Rand Paul: So over the past 40 years, four times have we actually done the right thing—passed 12 individual appropriation bills, bundled them together, have a budget, and try to do the right thing. You know, there’s no guarantee that everybody’ll be wise in their spending, but it’s got to be better; it can’t be worse. What do we do instead? It’s called a continuing resolution. We glom all the bills together in one bill, like we’ve done tonight—Republicans and Democrats clasping hands—and nobody’s going to look at it. Nobody’s going to reform the spending. As a consequence, wasteful spending is riddled throughout your government. Only four times in 40 years have we done the appropriation process the way we’re supposed to.

Senator Rand Paul: The last thing I’ll get to is something called the debt ceiling. The debt ceiling is something that has been a limitation on how much we spend, and we have to vote on it, and it’s an unpleasant vote. And so they try to either do it for a long period of time or try to stretch it beyond elections. So this bill, the 700-page bill that no one read, that will continue all the spending and will not reform your government and is irresponsible—the one we will pass later tonight—that 700-page bill also allows the debt ceiling to go up. Historically, we would let the debt ceiling—our borrowing limit—we would let it go up a dollar amount. We’d say, well, we’ve got to borrow money, and it looks like we’re going to need a trillion dollars. But you know the way they do it now? It’s like everything else around here: We bend, break the rules, and then somehow there’s a little bit of deviousness to it. The debt ceiling will go up in an unspecified amount. So as much as you can borrow between now and November, go for it. So there is no limitation. The debt ceiling becomes not a limitation at all.

Senator Rand Paul: And the media doesn’t even get it. The media does you such a disservice. They can’t even understand what’s going on sometimes. They’re like, bipartisanship has broken out. Hallelujah! Republicans and Democrats are getting along. And in reality, they should be telling you, look for your wallet; check your pants to make sure they haven’t taken your wallet, because when both parties are happy and both parties are getting together and doing stuff, guess what? They were usually looting the Treasury. And that’s what this bill does. It’s going to loot the Treasury. It spends money we don’t have. We will have a trillion-dollar deficit this year.