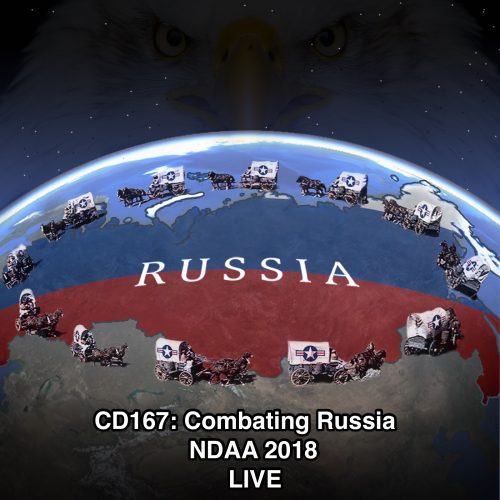 We’re doing it live! In this episode, recorded in front of a live audience at Podfest in Orlando, Florida, learn about the concerning permissions granted to the war departments in the 2018 National Defense Authorization Act which are designed to antagonize Russia.
Also, a special guest, Ryan DeLisle, joins Jen on her hotel patio to chat and say thank you to the listeners who keep this podcast in existence.

Dan Lamothe. December 6, 2017. “There are four times as many U.S. troops in Syria as previously acknowledged by the Pentagon.” The Washington Post.

“John McCain went to Ukraine and stood on stage with a man accused of being an anti-semitic neo-nazi’” Business Insider.

Remarks by Secretary of State: Remarks on the Way Forward for the United States Regarding Syria, U.S. Department of State, January 17, 2018.

00:06:15 Joe Biden: they cannot compete against a unified West. I think that is Putin’s judgment. And so everything he can do to dismantle the post-World War II liberal world order, including NATO and the EU, I think, is viewed as in their immediate self-interest.

00:20:00 Biden: They’re in a situation where they’re an oil-based economy. You have Gazprom going from a market value of something like $350 billion to $50 billion in the last 10 years. What do you do if you are a democratic leader of Russia? What do you do? How do you provide jobs for your people? Where do you go? How do you build that country, unless you engage the West?

00:24:15 Haass: In the piece, the two of you say that there’s no truth that the United States—unlike what Putin seems to believe or say, that the U.S. is seeking regime change in Russia. So the question I have is, should we be? And if not, if we shouldn’t be seeking regime change, what should we be seeking in the way of political change inside Russia? What’s an appropriate agenda for the United States vis-à-vis Russia, internally? Biden: I’ll give you one concrete example. I was—not I, but it just happened to be that was the assignment I got. I got all the good ones. And so I got Ukraine. And I remember going over, convincing our team, our leaders to—convincing that we should be providing for loan guarantees. And I went over, I guess, the 12th, 13th time to Kiev. And I was supposed to announce that there was another billion-dollar loan guarantee. And I had gotten a commitment from Poroshenko and from Yatsenyuk that they would take action against the state prosecutor. And they didn’t. So they said they had—they were walking out to a press conference. I said, nah, I’m not going to—or, we’re not going to give you the billion dollars. They said, you have no authority. You’re not the president. The president said—I said, call him. (Laughter.) I said, I’m telling you, you’re not getting the billion dollars. I said, you’re not getting the billion. I’m going to be leaving here in, I think it was about six hours. I looked at them and said: I’m leaving in six hours. If the prosecutor is not fired, you’re not getting the money. Well, son of a bitch. (Laughter.) He got fired. And they put in place someone who was solid at the time.

Hearing: Authorization for Use of Military Force;

Hearing: Securing Peace After the Fall of ISIL

1:47:00 Joseph Pennington: I would also point out the support that we have provided to the Iraqi government in terms of getting its fiscal house in order on the economic side, the economic pressures that Iraq has been under because of the conflict, the presence of ISIS, the collapse of oil prices, the humanitarian crisis, that created an economic crisis both in Baghdad and Erbil of massive proportions. We and other G7 partners stepped forward to fill the fiscal gap. We, through a sovereign loan guarantee, a billion-dollar sovereign loan guarantee, which the Iraqis, then, followed up by borrowing in the private market that would not have been possible without our support, and getting a deal with the IMF, which provided the additional financing necessary to close that gap and keep the government on its feet during this time of tremendous challenge. Again, would not have been possible without U.S. support, and that the IMF program has been the key to starting the government on a path of significant economic reform, which they are complying with the conditions of the IMF program.

40:00 Stephen Hadley: We’re putting battalions—we, NATO—putting battalions in the three Baltic states and in Poland and in Bucharest. Battalions are 1200 people, 1500 people. Russia is going to have an exercise in Belarus that newspaper reports suggest maybe up to 100,000 people and 8,000 tanks—I think I’ve got that number right— Unknown Speaker: This month. Hadley: —more tanks than Germany, France, and U.K. have combined. And we have to be careful that we don’t get in this very confrontational, rhetorical position with Russia and not have the resources to back it up.

39:40 Tim Ryan (OH): What’s happening with these sanctions here in the targeting of Russian gas pipelines—their number one export—I think is entirely appropriate. The Nord Stream 2, which carries gas from Russia through the Baltics to Germany—and I know Germany isn’t happy about it, but this is something that we have to do. And the point I want to make is we have to address this issue in a comprehensive way. We must continue to focus on how we get our gas here in the United States, our natural gas, to Europe, to our allies, so they’re not so dependent on Russia. We’ve got to have the sanctions, but we’ve also got to be shipping liquid natural gas to some of these allies of ours so they’re not so dependent on the Russians, which is part and parcel of this entire approach.

00:20:15 Sen. McCain: For seven decades, the United States has played a unique role in the world. We’ve not only put America first, but we’ve done so by maintaining and advancing a world order that has expanded security, prosperity, and freedom. This has required our alliances, our trade, our diplomacy, our values, but most of all, our military for when would-be aggressors aspire to threaten world order. It’s the global striking power of America’s armed forces that must deter or thwart their ambitions. Too many Americans, too many Americans seem to have forgotten this in recent years. Too many have forgotten that our world order is not self-sustaining. Too many have forgotten that while the threats we face may not have purely military solutions, they all have military dimensions. In short, too many have forgotten that hard power matters—having it, threatening it, leveraging it for diplomacy, and, at times, using it. Fairly or not, there is a perception around the world that America is weak and distracted, and that has only emboldened our adversaries to challenge the current world order.

00:51:20 John McCain: You are a distinguished student of history, and, as we are all aware, that following World War II, a world order was established which has held for, basically, the last 70 years. Do you believe that that world order is now under more strain than it’s ever been? Sen. Mattis: I think it’s under the biggest attack since World War II, sir, and that’s from Russia, from terrorist groups, and with what China is doing in the South China Sea.

0:19 Reporter: Can you say whether you—if this call is a recording of an authentic conversation between Assistant Secretary Nuland and Ambassador Pyatt? Jen Psaki: Well, I’m not going to confirm or outline details. I understand there are a lot of reports out there, and there’s a recording out there, but I’m not going to confirm a private diplomatic conversation. Reporter: So you are not saying that you believe this is a—you think this is not authentic? You think this is a— Psaki: It’s not an accusation I’m making. I’m just not going to confirm the specifics of it. Reporter: Well, you can’t even say whether there was a—that this call—you believe that this call, you believe that this recording is a recording of a real telephone call? Psaki: I didn’t say it was inauthentic. I think we can leave it at that. Reporter: Okay, so, you’re allowing the fact that it is authentic. Psaki: Yes. Reporter: “Yes,” okay. Psaki: Do you have a question about it?

00:09:30 McCain: In recent months, President Putin has pulled out all the stops to coerce, intimidate, and threaten Ukraine away from Europe. Russia has blocked large amounts of Ukrainian trade, especially chocolate. It has threatened to cut off its gas supplies in the dead of winter, which it has done before. And according to Ukrainian officials we met in Kyiv, President Putin threatened President Yanukovich with far worse economic retaliation if he signed the Association Agreement with the EU.
00:16:45 McCain: If Ukraine’s political crisis persists or deepens, which is a real possibility, we must support creative Ukrainian efforts to resolve it. Senator Murphy and I heard a few such ideas last weekend—from holding early elections, as the opposition is now demanding, to the institution of a technocratic government with a mandate to make the difficult reforms required for Ukraine’s long-term economic health and sustainable development. Decisions such as these are for Ukrainians to make—no one else—and if they request our assistance, we should provide it where possible. Finally, we must encourage the European Union and the IMF to keep their doors open to Ukraine. Ultimately, the support of both institutions is indispensable for Ukraine’s future. And eventually, a Ukrainian President, either this one or a future one, will be prepared to accept the fundamental choice facing the country, which is this: While there are real short-term costs to the political and economic reforms required for IMF assistance and EU integration, and while President Putin will likely add to these costs by retaliating against Ukraine’s economy, the long-term benefits for Ukraine in taking these tough steps are far greater and almost limitless. This decision cannot be borne by one person alone in Ukraine. Nor should it be. It must be shared—both the risks and the rewards—by all Ukrainians, especially the opposition and business elite. It must also be shared by the EU, the IMF and the United States. All of us in the West should be prepared to help Ukraine, financially and otherwise, to overcome the short-term pain that reforms will require and Russia may inflict.

Presidential Address: Use of Force in Syria

Discussion: Beyond NAFTA and GATT

26:00:00 Dunkel: If I look back at the last 25 years, what did we have? We had two worlds: The so-called Market Economy world and the sadly planned world; the sadly planned world disappeared. One of the main challenges of the Uruguay round has been to create a world wide system. I think we have to think of that. Secondly, why a world wide system? Because, basically, I consider that if governments cooperate in trade policy field, you reduce the risks of tension – political tension and even worse than that.”

Music Presented in This Episode
Intro & Exit: Tired of Being Lied To by David Ippolito (found on Music Alley by mevio)