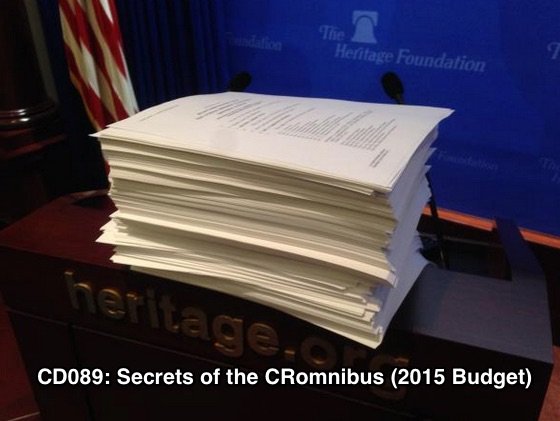 In this episode, we look at the riders added to the must-sign 2015 budget, including favors for Wall Street, unions, agribusiness, the oil and gas industry, electric utilities, the vending machine industry, telecoms, the trucking industry, the insurance industry, and the politicians themselves.

Article: A First-Time Home Buyer’s Guide: What You Need to Know by Brian Robson, The Simple Dollar, February 2018.

The Department of the Interior

Amendments identical to Sections 419 and 420 were attached to the 2014 budget by Rep. Ken Calvert of Southern California. He has taken over $650,000 from Agribusiness.

Ebola money is available for use until September 30, 2019.

Funding for the Department of Homeland Security remains at the same levels as 2014. Funding runs out on February 27, 2015.

This section includes the altered text of HR 4414, the Expatriate Health Coverage Clarification Act of 2014, which was discussed on Congressional Dish episode CD075: The April Bills.

The original version of this bill was written by Rep. John Carney of Delaware, who has taken over $312,000 from the insurance industry.

In May, as discussed on Congressional Dish episode CD071: Our New Laws, the President signed into law the Gabriella Miller Kids First Research Act, which eliminated public financing of political party conventions.

We don’t know exactly how much individuals will be able to contribute to political parties now that this provision is law. NPR has a different number than the Washington Post, which has a different number than The New York Times. Congressional Dish calculations indicate that the changes will allow an individual to contribute at least $257,400 per year and that amount increases every two years based on the Consumer Price Index.

Under the Employee Retirement Income Security Act (ERISA), pensions for retiree’s who have already started to collect benefits can’t be cut unless a company goes into bankruptcy. This section changes the law to allow benefit cuts to multi-employer pension plans under other scenarios.

OpenSecrets: Rep. John Kline has taken over $14 million in campaign contributions from all kinds of industries.

OpenSecrets: Former Rep. George Miller took over $2.4 million from unions, that we know of.

Have something to say? Leave a message on the Congressional Dish voicemail line and it might be featured on the show!

Thank you for supporting Congressional Dish