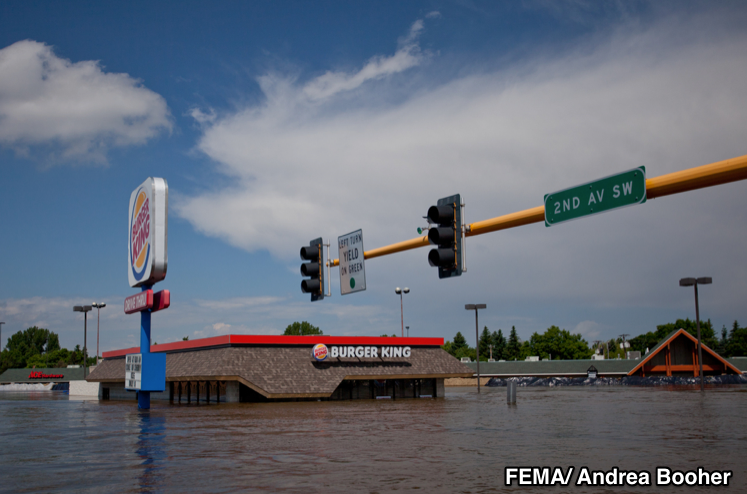 
In the United States, we have a nationalized flood insurance industry. The question becomes then, does our flood insurance system have protections in place to make sure that our tax money is protected? Does is make the people in flood zones pay enough to cover the replacement of their homes? Do the rules make sense? Unfortunately, the answers to these questions are all the same: No.

The National Flood Insurance Program was created in 1968 because the private market refused to offer flood insurance after recurring, expensive flooding of the Mississippi River in the 1960s. The refusal of the private sector to provide flood insurance, a product that was in high demand by people in flood zones, left the government with the option of either bailing out flood victims or creating an insurance program itself, so that people in flood zones would at least chip into the pot of money that would inevitably be used to rebuild after floods occur.

The National Flood Insurance Program is managed by FEMA and has three main goals:

However, because of this dilution that private sector involvement is a good thing in it’s own right, private insurance companies manage our flood insurance program even though they are not exposed to any risks.  But this sweet deal isn’t quite sweet enough for the private market as they still want out of the program.

“The main reason carriers have been leaving the National Flood Insurance Program is #1, the profit margin is very slim. We receive approximately 30% for administering this program. Out of that 30%, we pay our agents 20%. We then pay state premium taxes of of 2%, which leaves us 8 points to manage this program and to pay for all of our costs.

Flood insurance is only mandatory for people with a federally backed mortgage. It’s still optional for everyone else and many people opt not to buy it, even though they’re in a flood zone. However, even the people required to get flood insurance as a term in their mortgage agreement, often just let the policy lapse once they’re in their home or business. With only the truly responsible paying into the program, we end up paying through emergency FEMA funds to rebuild buildings for people who chose not to insure their property. Smart freeloaders know that the government will pay for them either way.

Despite the debt, as of 2012, the flood insurance program was still only collecting about $3.5 billion in premiums. About $1 billion of that goes to private insurance companies, who assume none of the risk and merely sign people up for a profit.

One of the reasons that premiums are so low is because we offer subsidies to about 20% of buildings with flood insurance. These people can pay as little as 40% of their own premiums, with the rest of us picking up the rest of their premium tabs and rebuilding their homes – often in the same exact spot where it was destroyed.

For example, a home in Biloxi, Mississippi flooded over 15 times in a decade. The home, valued at $183,000 has cost us $1.47 million to repeatedly repair and rebuild.

Another problem is that local communities often fight flood prevention measures. Communities in New York and New Jersey have fought recommendations by the Army Corps of Engineers to put up sand dunes on the beaches to protect from ocean flooding. Their reason? They might block ocean views.

Another example is in Tuckerton, NJ, which was told by FEMA and the Army Corps of Engineers to elevate houses on the shore and/or relocate them to somewhere outside the flood zone. They didn’t bother and Hurricane Sandy wiped out almost half the homes in their community, except for the few that were elevated by individual, responsible homeowners.

Another huge issue that we’re having with the flood insurance program is that our flood zone maps aren’t accurate. Now, what we’re seeing is that communities that are newly placed into flood zones by updated maps are getting pissed and demanding the maps be redrawn. They insist they are not in flood zones and that they should not have to pay more for insurance because a new map says they are in a flood zone.

That’s the problem with the mapping process, we just don’t know how accurate they are. Many, many counties in this country are still operating under old maps, which underestimate the number of buildings in harms way. Our problem is not that too many people are being included in the maps – as whiny Congressmen might have you believe.

Many of my constituents have told me that they are in a Special Flood Hazard Area, despite no evidence of the area ever flooding. – Rep. Shelly Moore Capito of West Virgina


The problem is that the current maps are telling people that they are safe when they’re not.

Until 2003, FEMA had been using mostly paper maps drawn in the 1970s and ‘80s. That year, at the urging of floodplain administrators, Congress created a law that designated about $1 billion — $200 million a year for five years — to update and digitize the nation’s flood maps. But David Maurstad, who ran the flood insurance program from 2004 to 2008, said he told the White House’s Office of Management and Budget that the money wouldn’t come close to covering the cost of updating all the maps. The Association of State Floodplain Managers estimated the total cost of updating flood maps nationwide at $4.5 billion to $7.5 billion. $1 billion wasn’t going to cut it.

Even after Hurricane Sandy proved in no uncertain terms that the maps were not accurate, and were leaving too many locations out of flood zones – putting life, property, and tax dollars in danger, Congress has actually cut spending on flood mapping in recent years. Congress allocated $99 million for updating maps in 2012 and 2013, roughly half of what it had spent annually since 2004.

Investing in new maps is crucial because modern technologies are capable of producing far more accurate maps. Lidar, which is collected by airplanes that shoot laser pulses at the ground, can detect differences in ground elevation of as little as 3 inches and produces data that’s 10 times as accurate as that used to generate earlier maps. And computer programs such as ADCIRC can model storm surge and wave action with far greater accuracy.
We have the ability to get this right. What we haven’t had is people in Congress to care enough or understand enough to fund it.

Although, even with this great new technology and even if we fully funded accurate mapping, we still have a huge problem. The FEMA maps are not taking predicted sea level rise and climate change factors into account.


So, does the bill signed into law last month, which edits the 2012 Biggert-Waters Flood Insurance Reform law, does this new law fix these situations? Let’s look at the details.

Section 4: Got rid of a requirement that premium adjustments be made based on the current risk of flooding

Section 6: Gives people in areas that weren’t in a flood zone before but are in a flood zone after re-mapping a subsidy for their first year and then premiums will increase no more than 18% per year until they are paying the correct amount for insurance for their level of flood risk.

Section 7: Insurance writers must “strive to minimize” the number of yearly premiums that are over 1% of the coverage. $10,000 per year for a million dollar policy.

Section 8: All new and renewing flood insurance policies will include a new yearly surcharge.

Section 10: FEMA can buy insurance for the flood insurance program from the private sector.

Section 12: Gives homeowners the option of buying policies with deductibles as high as $10,000

Section 13: Flood insurance is not required for buildings that aren’t attached to your house and that no one lives in.

Section 14: Improvements made to the home to prevent flooding will be taken into account when determining insurance premiums

Section 17:The Technical Mapping Advisory Council will have to sign off on hazard maps to make sure they are credible.

Section 19: In communities where have a flood mitigation project, the people in that flood zone will get lower premiums because of that project.


Section 30: Gives affected communities more information during the mapping process and gives them a 30 day window after the first draft is done to add their own data “that can be used to supplement or modify the existing data

Additional Information Discussed in This Episode

A tornado destroyed multiple towns in Arkansas this weekend, including Mayflower, AR and Vilonia, Ar.

What a pic! RT Amazing photo from @Basehunters of Louisville, MS supercell that produced the EF-4 tornado Mon. night pic.twitter.com/RyckBgbK3L

Pensacola had 20 inches of rain and major flooding

I friend sent me this that was sent to her from Pensacola area. awful !! pic.twitter.com/9PZXwuV5Gi — Jim Cantore (@JimCantore) April 30, 2014


Music Presented in This Episode

Music: After the Flood by William Brooks

The Score G Exchange on iTunes

Buy The Union on Amazon

Check out the trailer for The Culture High