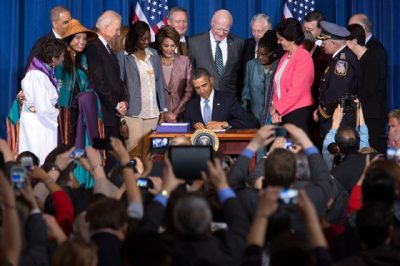 We take a close look at the Violence Against Women Act re-authorization as the President signs it into law. We also look at the continuing resolution passed by the House, which funds defense while leaving the rest of the government in chaos.

S. 47: Violence Against Women Re-Authorization Act of 2013… Was signed by the President! This one is law. President Obama signs VAWA on March 7, 2013

Report Comptroller General of the United States will issue a report to Congress in two years on the use of foreign labor contractors by U.S. employers. It will include the role of labor recruiters that provide low-wage foreigners to companies, the effectiveness of current regulators enforcement of laws already on the books, describe the jobs the foreigners are doing and how many of them are here, and identify abuses of foreigners including use of fees and debts. Funding

H.R. 933: House Continuing Resolution Right now, we are in the middle of two crisis’: The sequester is one, an unfunded government that would have to shut down on March 27th is the other. This bill does nothing to solve the sequester. In fact, it expressly keeps it in place. Two of the 12 appropriations categories are funded until the end of the year in the responsible appropriations way in this bill. The other 10 are funded as a continuing resolution, that keeps the funding at old chaotic levels. The House did real work on the Defense appropriations; the Senate is going to change everything on the domestic side as this bill has a real chance of becoming law. In the defense section of the bill, I looked at what items were dramatically over-funded in comparison to what was requested by President Obama and the military. Fighter Jets Boeing F/A-18E/F fighter jets would be given $605 million more than was requested for 11 new airplanes. Boeing/Northrup EA-18G Growler fighter jets are the electronic warfare version of the Boeing F/A-18E/F. They would be given $45 million for 15 new aircraft. Budget request from the military for this item: $0. $0 request, given $45 million for 15 new aircraft Ships/Submarines General Dynamics Virginia Class nuclear submarines would be given $778 million more than requested. These submarines are built in two locations, which makes the submarines more expensive but the program is designed to keep both shipyards in operation. Location #1: General Dynamics Electric Boat in Groton, CT. The Representative in Groton, CT is Joe Courtney; his top campaign contributors are General Dynamics and Northrup Grumman. Location #2: Newport News Shipbuilding & Drydock Company. The Representative in Newport News, VA is Rob Wittman; he is on the Armed Services Committee & his top campaign contributor is Northrup Grumman. — Northrup Grumman LPD-17 naval ship would be constructed at Huntington Ingalls Industries in Newport News, VA for $263 million. Budget request for this item: $0. The Representative in Newport News, VA is Rob Wittman; he sits on the Armed Services Committee and his top campaign contributor is Northrup Grumman. — A DDG-51 Destroyer would be ordered for $1 billion. No one requested this ship. DDG-51 Destroyers are built in either Bath, ME by General Dynamic’s Bath Iron Works or in Newport News, VA by Huntington Ingalls Industries (formerly Northrup Grumman). Lockheed is the lead contractor for the DDG-51 combat system Lockheed Martin — General Atomics MQ-9 Reaper predator drones would be given $155 million more than requested so the Air Force can order twelve more. Then Chief of Staff of the U.S. Air Force said in 2006 about the predator drones: “We’ve moved from using UAVs primarily in intelligence, surveillance and reconnaissance roles before Operation Iraqi Freedom, to a true hunter-killer role with the Reaper.” Missile Defense Systems Raytheon’s Patriot missile defense system would be given $300 million more than requested to increase the program. — Aegis ballistic missile defense system would be over-funded by $189 million to buy 17 additional Raytheon SM-3 interceptors, which are ship-based missile interceptors designed to shoot down short & intermediate range ballistic missiles and have been used to shoot down satellites. Israel Israel’s Iron Dome missile defense system would be given $211 million. Budget request: $0. Iron Dome manufactured by a Israel-owned defense technology company, but U.S. is trying to get a co-production deal like they have on their other missile defense system which is co-produced by Boeing Upper tier/Arrow programs are the “other” missile defense programs partnered with Boeing. David’s sling is a third missile defense system for Israel that partners with Raytheon. The Upper Tier/Arrow and David’s Sling missile programs together were given $169 million more than requested. Total in unrequested money given to Israel for missile defense: $380 million. Miscellaneous Appropriations Advanced hypersonic weapon program which “aims to develop a system to deliver a precision conventional weapon strike anywhere in the world within one hour” overfunded by $90 million. — Defense Rapid Innovation Fund, which is supposed to funnel Department of Defense contracts to small businesses was given $250 million. Budget Request: $0. — $5+ billion for the Afghanistan security forces (all of it requested). — “Miscellaneous equipment” would be given to every branch of the military. Total = $1.5 billion. None of these funds were requested. Creepy Spy Sh*t Camp Williams in Utah – location of the Utah Data Center was given $191,414,000 (all of it requested). Total Classified Programs: $31,309,229,000 = $900 million more than was requested. Good News Over-funded medical research by $635 million. Things that will be studied include: